Many of you read about my experience watching my son make a 3D plaster cast of his body for a science project on the respiratory system...well, the project is done (and he got an A+!). This was a great project from a mom point-of-view: the supplies were cheap, it allowed for TONS of creativity on my son's part, and he could pretty much handle the whole thing himself--oh, and it didn't chew up a entire weekend! He worked on it one Saturday morning (taking breaks to go sledding and visit with company). And he was super-proud of it! That's my kind of project!

So here are the finished picts. Hopefully it inspires you to try something new! 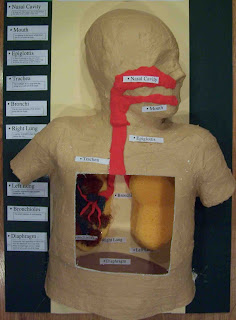 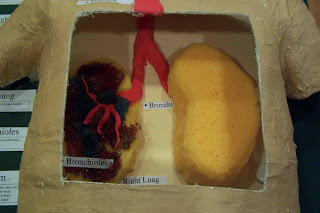 The details of the project (in case you were wondering):

The plaster cast was made using three packages of plaster tape bought at Michael's. The strips were about 4" wide and 8' long--we cut them to size (some 4" strips, some 8" strips and some 12" strips), dipped them in warm water, and then applied them to my son's body (make sure you coat the model's body with petroleum jelly before putting the strips on).

The dried cast was painted with leftover house paint my son found in our garage (I am worried I needed that paint, but c'est la vie!).

The red stuff (used for the nasal cavity, mouth, trachea, and bronchi) is model magic--I think he used one standard size package.

The lungs are sponges that he used scissors to cut into lung shapes.

The bronchioles are made from some leftover moss we had that he sprayed with red and blue spray paint (which he also found in the garage).

The whole thing is mounted on foam core (from the Dollar Store) that was covered in leftover colored paper. He also went crazy using the hot glue gun on this project.
Posted by Mrs. P at 5:30 AM